ISIS Hospitality, the developer, owner and manager of a long list of successful hotels, restaurants and casinos in South Dakota, was looking for a solution to increase revenues and attract new clientele in a relatively small market. As many hotel operators have been adding increasingly elaborate amenities over the past few years, like indoor pools and waterslides to remain competitive, ISIS Hospitality wanted to construct an indoor waterpark that would attract visitors and drive business to their two adjacent hotels. The goal was to create a fun, family-focused entertainment center that would be a destination in itself.

After researching several other waterparks throughout North America, ISIS partners Donnie Patton, Tom Bradsky and Paul Bradsky were most impressed with the OpenAire concept they experienced at the Americana indoor waterpark in Niagara Falls. They invited OpenAire to help design their vision of a destination-worthy facility.

OpenAire designed, manufactured and installed an operable glazed structure for what is now the largest waterpark resort in the Dakotas. The park and its adjoining hotels, which opened in 2006, make up a $50 million family fun complex at the corner of Interstate 90 and Elk Vale Road in Rapid City.

The striking 19,500 square-foot structure houses an elaborate series of waterslides, pools and colorful water play structures. The 130' (39.6m) x 150' (45.7m) retractable enclosure has 26' (7.9m) high side walls and a cupola that accommodates a 41' (12.5m) slide tower, another tower at the opposite end of the structure has three additional water slides.

"The OpenAire building allows us to use our park year-round," says Donnie Patton, Co-owner, ISIS Hospitality. "With the glass enclosure you get to enjoy the view outside without the chilly temperatures of fall and winter. And on those sunny days we can open the roof for the ultimate experience of the great outdoors while still inside."

WaTiki was so pleased with their initial experience that when the time came to build an addition, they invited OpenAire back without hesitation. Completed in 2010, they built a restaurant enclosure over the park's Slider's Bar and Grill featuring a retractable roof over the bar area of the restaurant. The add-on also makes it the only restaurant in the country with a waterslide that provides patrons with views of sliders going right through it.

The OpenAire enclosure makes the facility extremely energy efficient. Because of the great daylighting, considerably less electricity is needed for day-to-day operations. WaTiki has realized significant savings on HVAC costs as well; dehumidification can be shut down completely when the roof is open in summer, and in winter, solar heat gain from the glazed panels helps heat the space.

The uniquely adaptable design of OpenAire structures ensures they can be easily modified for future expansion. For a multi-phase project like WaTiki, OpenAire's forward-thinking approach has been an ideal solution to accommodate ongoing growth. The new component meshes beautifully with the original structure, creating a dramatic space that’s airy, open and one-of-a-kind.

With the WaTiki Waterpark Resort, ISIS has taken the amenity race a huge step further. No longer just a stopover on the way to other attractions, it is now a popular year-round destination in its own right. Since they opened, popularity has increased with the new restaurant enclosure and 2011 is proving to be another great year, even in a down economy.

"With over 250 rooms available for our guests and plans to add another 100 to 150 more rooms, combined with an amazing waterpark, we have the greatest year-round facility in the Black Hills, hands down," says Patton. 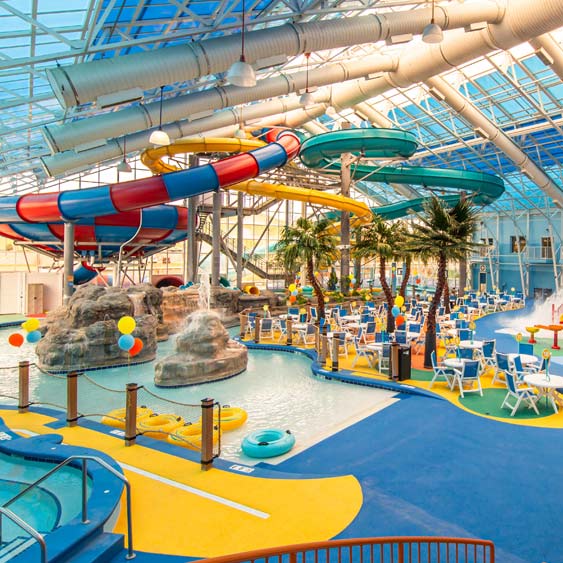