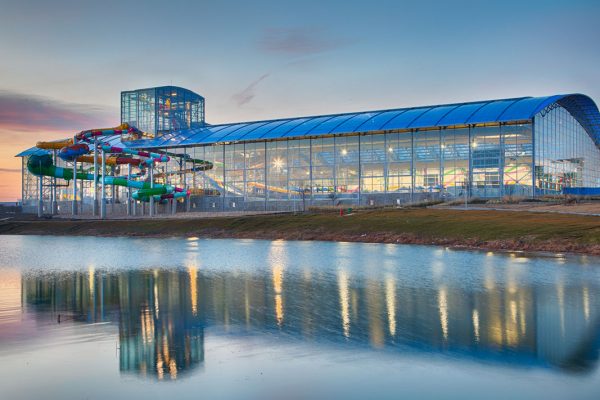 The City of Grand Prairie, Texas chooses OpenAire as a key partner for its massive recreation center and waterpark development

OAKVILLE, ONTARIO – Tuesday, November 17, 2015 – Grand Prairie, Texas was ablaze with fireworks, live music and other exciting events on Saturday, October 17 as the city officially kicked off construction on a revolutionary entertainment complex dubbed The Epic at Grand Central.

This massive $75 million project featuring 172 acres of indoor and outdoor recreational space has been made possible by a collaborative effort between OpenAire and leading industry experts, who were all excited to break ground on the new public landmark. City officials were just as enthusiastic. “We were so pumped to have y'all out at the wild and crazy 'GrandBreaking,'” said Rick Herold, Director of Parks, Arts & Recreation, to a crowd of 3,000 guests, “Hundreds of [Grand Prairie citizens'] ideas have been incorporated into this 'legacy project.' We want everyone to say, 'my thumbprint is on this development!'”.

The facility, described by Grand Prairie Mayor Ron Jensen as a “mega recreation center,” will include a 120,000 square-foot rec/fitness center with a variety of incredible features, a fully-accessible playground, a grand entertainment lawn for concerts and events, many outdoor trails, a waterpark and much more. OpenAire is especially excited to have played a key role in the design of the center’s Epic Waters indoor/outdoor waterpark, which will be the largest retractable-roofed indoor waterpark in North America.

OpenAire, based in Oakville, Ontario, is no stranger to large development partnerships, having teamed with industry-leading architects and developers to create exceptional projects around the world, but Grand Prairie's Epic stands out for the great enthusiasm and public support it has attracted. Many visitors to The Epic's ground breaking were excited to have a major public entertainment center that includes indoor and outdoor space for citizens of all ages and abilities. Several were especially excited about the aquatic fun that Epic Waters will offer. OpenAire's expansive enclosure for Epic Waters will blend the security of an indoor waterpark with the vibrant, sunlit atmosphere of an outdoor park, letting everyone enjoy the center’s amazing attractions in perfect conditions. Epic Waters will be home to some of America's “firsts” in water slide design, including the tallest Aqualoop in the USA and the world's first combined boomerango and constrictor slides.

Richard Coleman, Principal and Senior VP of Development and Operations of American Resort Management, which will operate the park, is excited about his company's work with OpenAire. “The Epicness of this facility will be evident from the first step you take inside,” he says, “A massive transparent retractable roof will allow us to share the weather outside when desirable or better yet, if needed, protect you from the elements while maintaining a beautiful 85 degrees every day of the year.”

“It's an honor to be a partner in this great city-wide facility and attraction for Grand Prairie,” says Mark Albertine, President and CEO of OpenAire, “The Epic development is going to represent Grand Prairie to the world, and we are working closely with all of our partners to make sure the center showcases the best designs and the best technologies. Not only will our enclosure of 160 foot wide and nearly 62,000 square foot for Epic Waters have the best retractable roofing technologies available, which can close automatically and quickly at the first drops of precipitation; the entire facility is made to create completely new recreation experiences, from the high-tech recreation center to the fully-accessible PlayGrand Adventures playground. I've never seen an entertainment center like The Epic. This place lives up to its name.”

The OpenAire enclosure’s grand design connects seamlessly with the sweeping architecture of the rest of The Epic's facility, designed by HKS Architects Inc., Dallas TX.

OpenAire and all of the other development partners are thrilled to start making The Epic a reality. Opening in 2017, The Epic at Grand Central is sure to be a monument to the people of Grand Prairie's epic ambition and community spirit.