We all know Florida is pretty much the go-to state for year-round fun in the sun. Many people from further to the north and west will be heading down there soon, as winter starts to set in, to take advantage of the perennial sunshine across the state’s many beaches and water parks.

With this in mind, we decided to find out which of the Sunshine State’s innumerable water parks are the best. It seems most are in and around the well known Florida Theme Park Capital of the East; Orlando! There is a lot of stiff competition but the internet seems to be quite unanimous that the following are Florida’s indisputable top five:

It comes as no surprise that the world’s most beloved entertainment brand takes a prominent place on this list. Typhoon Lagoon is listed by TripAdvisor as the number one water park, not only in Florida but across the United States. This is easy to understand when you consider its attractions:

With thrills and chills aplenty, all in the magical setting we’ve come to expect from Disney, Typhoon Lagoon can’t be missed.

If thrills are what you’re after, then you really can’t go wrong with Aquatica. Located just nine miles away from this list’s Number One, and forming part of the SeaWorld complex, Aquatica appears to focus more on the thrill rides than its rival does. Here you will find high-speed slides and wave pools, including the Taumata Racer – an adrenaline-infused, head-first toboggan ride. There is also the Dolphin Plunge, which takes you through the habitat of SeaWorld’s dolphin pod. That is if you can spot them as you rush through at high speed! It’s not all about thrills though; there are some absolutely breath-taking, peaceful beaches too.

The pirate-themed jewel in the crown of Panama City features the famous Great Shipwreck, where guests ride out on a cable slide before plunging into the cool water below. There’s also the White Knuckle River – which speaks for itself – as well as Skull Island and a 750-gallon tipping bucket.

Disney’s other Orlando Park comes in at number 4 with one of the world’s tallest, fastest freefall body slides – the aptly named Summit Plummet and a choice of three inner tube slides at Runoff Rapids.

The last one on the list also features some of the wildest rides. Can you handle Big Thunder, which drops four-person rafts into an immense funnel for a crazy spin to the bottom? How about the Brain Drain, which features a pair of 70 ft vertical drops? All in all, Rapids has 42 rides. If you manage to ride all of them in a single visit, there would be no time for repeats.

At OpenAire, we know our water parks. We have built enclosures for many of the country’s finest, helping turn them into year-round attractions, regardless of the weather or climate. From the northern border to the deep south, OpenAire is helping clients create year-round water parks. These include one of the top 5 parks in Texas; Epic Waters, the largest indoor Waterpark in the USA; Kalahari in the Pocono Mountains Pennsylvania, Zehnder’s Splash Village in Michigan, Pirate’s Cay in Illinois, Jay Peak’s Pump House Waterpark in Vermont and Water-Zoo Indoor Water Park in Oklahoma. Contact us to see how we can help you! 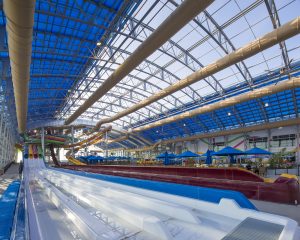