5 of the Most Incredible Enclosed Sports Venues Around the World 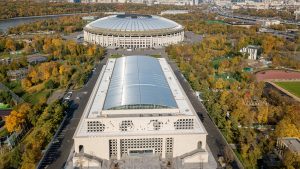 The design and construction of sports stadiums has become an architectural art form in its own right, a design discipline that has generated some of the most impressive structures ever to grace any city’s skyline. These buildings are perhaps most impressive when the sports venue in question is fitted with a fixed or retractable roof. Here we highlight five of the biggest and most beautiful of these structures.

The home ground of the Dallas Cowboys, the AT & T Stadium has a maximum capacity of 105,000 and is one of the most expensive stadiums ever built. Although designed for football, it is also used for a wide variety of other activities, from basketball to wrestling to music concerts, all under a giant dome complete with a retractable roof.

Originally built to host the 1976 Olympics, the “Big O”, as it is known, is perhaps best recognized by the Montreal Tower, the inclined tower that looms over its northern side. The cables for the operation of the retractable roof are suspended from the tower. The Olympic Stadium has a seated capacity of 56,000 and is used for a wide variety of purposes.

This impressive sports complex has been built around what used to be known as the Central Lenin Stadium, and is Moscow’s prime sports venue. The stadium itself has undergone several upgrades over the years, and the Water Palace aquatic sport and recreation facility was opened at the end of 2019. OpenAire designed and built the retractable, 4,200 sqm polycarbonate skylight that now covers this unparalleled swimming and recreation venue.

Singapore’s new National Stadium was built on the site of the previous one, opening to the public in 2014. Its seating can be rearranged into different “modes” depending on the sports event being hosted. Most notably, this stadium holds the record for the largest dome structure in the world. The retractable roof takes approximately 25 minutes to open or close fully.

Tokyo’s famous “Big Egg” is the result of an ingenious piece of engineering. The fully enclosed roof is an air-supported structure, a flexible membrane that is held up by a slight pressurization of the atmosphere inside the stadium. It seats between 42,000 and 55,000 people and is predominantly used for baseball, although it has played host to a variety of sports and entertainment events.

OpenAire specializes in the design and construction of retractable roofing enclosures used to enclose sports venues and many other structures. Among the venues that have been enhanced with OpenAire retractable roofs are the following: