OpenAire has been committed to creating remarkable design solutions for clients around the world for nearly 30 years. Since 1989, our team of architects, designers, and engineers has created close to 1,000 customized retractable roofs and enclosures, transforming ordinary spaces into unforgettable sunlit environments. Over the years, OpenAire’s precision-engineered solutions have provided year-round outdoor-style spaces and won praise not just from clients and their customers, but also from leading industry reviewers. From Monday, April 9 to Wednesday, April 11, 2018, OpenAire will showcase these award-winning retractable roof designs, as well as its many design capabilities, at the annual DEAL (Dubai Entertainment and Leisure) Show at the Dubai World Trade Center in Dubai, UAE. Visitors to DEAL 2018 can find OpenAire at Booth Z2-122. OpenAire and its clients have received many awards and recognitions for their excellence. Here are only a few awards that our clients’ facilities have received in the past few years. 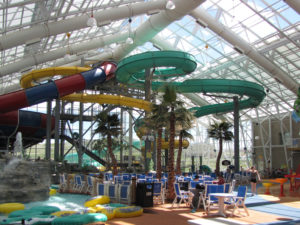 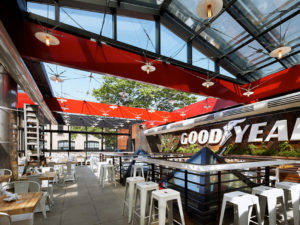 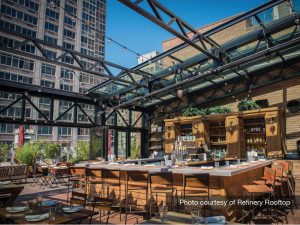 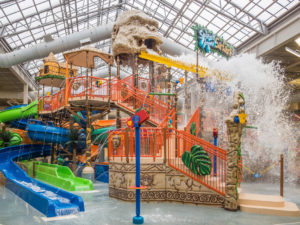 OpenAire's retractable roof over the waterpark at Kalahari Resorts in Pocono Mountains, Pennsylvania. 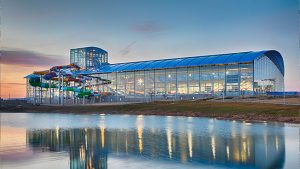 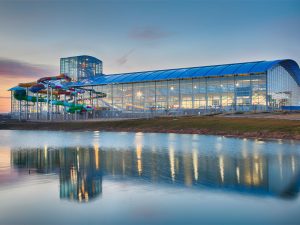 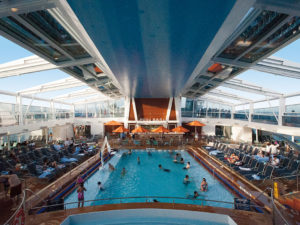 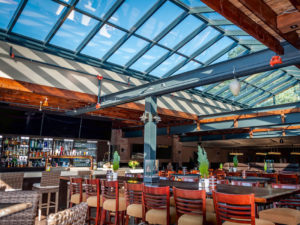 Aquatic parks are not the only venues that have won awards with OpenAire designs. The Refinery Hotel’s Refinery Rooftop bar in New York City’s Garment District has earned a total of five awards for its unique rooftop retractable roof and enclosure design, most recently the rank of number one hotel rooftop bar in the United States by USA Today’s 10Best Reader’s Choice Awards in 2017. This is the second time The Refinery Rooftop has won the top place in this award, the first being in 2015. The Refinery Hotel opened the beautiful retractable enclosure from OpenAire in 2013. The Refinery Rooftop Bar has also won a Restaurant & Bar Design Award in 2014, the SBID International Design Award for Hotel Design in 2015, and a spot on The Telegraph’s Top 10 Best Hotels in Manhattan in 2016.

Meanwhile, the City of Grand Prairie, TX was also awarded the National Recreation and Parks Association’s (NRPA) prestigious 2017 Gold Medal Award. The NRPA Gold Medal Award recognizes communities across the United States that have demonstrated “excellence in long-range planning, resource management and innovative approaches to delivering superb park and recreation services.” Grand Prairie and its residents have been committed to ambitious parks planning for many years, developing over 5,000 acres of park space to date. OpenAire’s work on Epic Waters Indoor Waterpark helped Grand Prairie secure the Gold Medal, demonstrating a sustainable, energy efficient and community-oriented design style. The structure lets in sunshine and fresh air year-round, creating a warm summer atmosphere for guests and saving energy costs by up to 27% yearly. OpenAire is very pleased that the NRPA and thousands of others have recognized the advantages of this progressive-thinking building style.

Recently, one of OpenAire’s unique installations became part of an award-winning Royal Caribbean cruise liner. Royal Caribbean’s Quantum-series cruise ships chose OpenAire to design attractive retractable roof and walls/windows to shelter their upper-deck pool and bar, adding an awe-inspiring feature to guests’ experiences. The second liner to feature OpenAire’s enclosure, Anthem of the Seas, was voted Cruise Hive magazine’s Best New Cruise Ship of 2015 by a majority of readers. Since then, OpenAire has completed an enclosure for Ovation of the Seas and is currently working on the fourth ship, Spectrum of the Seas.

The Gusto 101 diner in Toronto’s trendy Fashion District began its life as an abandoned industrial auto body shop. The restaurant’s owners wanted to create a diner atmosphere that was retro yet innovative. OpenAire offered them just the right solution: a telescoping all-glass retractable skylight and enclosure for the restaurant’s rooftop patio. This stylish design caught the attention of Hospitality Design (HD) Magazine, which “[honors] the achievements of superior design and architecture in spaces around the globe.” HD’s panel of industry experts chose Gusto 101 as the 2013 winner for Best Restaurant Design (Casual/Quick Service). It’s a distinction that hundreds of satisfied guests agree with.

In 2015, Etobicoke, Ontario’s landmark pool hall and restaurant The Crooked Cue was looking for a way to revitalize its location. OpenAire offered the solution they needed with a double-sloped, 20 ft x 48 ft skylight that retracts completely off the opening, allowing for direct sunshine and fresh air that turns the pool hall and restaurant into an outdoor patio. OpenAire’s team also collaborated with the owners to create a new interior design. The renovated and decorated restaurant and pool hall reopened and caught the attention of two major Canadian TV networks, TSN and the CBC, who each awarded The Crooked Cue a place on their lists of “Canada’s Top Pool Halls” for its great atmosphere and entertainment. The new enclosure proved so successful that The Crooked Cue installed another, identical skylight over the other half of its upper floor in 2016.

Since our first project, OpenAire has been dedicated to exceeding expectations and delivering the very best solutions. Our customized retractable roofs and enclosure designs are built to match our clients’ unique specifications and needs, providing energy efficiency, durable engineering, and awe-inspiring architecture. The fact that our work has helped our clients earn prestigious awards from around the world is the greatest honor we could receive. We hope that our next award-winning project can be for you!